Keep your kids reading this summer and help promote literacy in our community. Open to all ages. Sign up today! 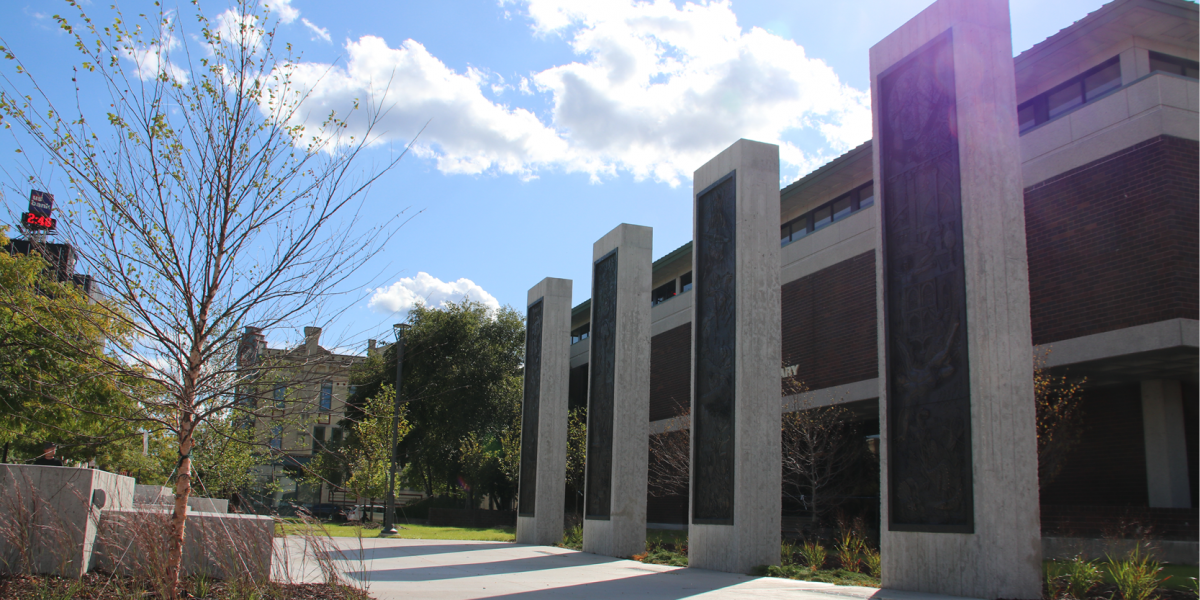 The 4-by-16-foot vertical cast brass relief sculptures along Eighth Street are the work of Sheboygan artist Sharron Quasius, in honor of Stefanie Weill, her husband John, and her brother Otto Byk.

The sculptures were the result of 18 months of work by the artist. After Quasius researched and then chose images for the four panels, she began the process of sculpting each of the 16 panels in an oil-based clay called plasticine. Those 4-by-4 foot panels were moved to the Kohler Co. Foundry where Quasius spent nine weeks while she made molds from sand and resin with the assistance of workers there. Each mold was subsequently used to produce a brass casting using 1,000 pounds of molten brass at a temperature of 1,860 degrees. Each panel weighs about 700 pounds. Work on the panels was completed in Quasius’ studio where she ground and buffed each one and applied a patina.

The sculptures were originally part of a 25-foot-high clocktower commissioned by the Stefanie H. Weill Charitable Fund, Inc., and located on the Weill/Byk Public Library Terrace, just to the north of the library entrance. The project was supported by Arts/Industry, a program of the John Michael Kohler Arts Center. The clocktower was razed as part of plaza renovation project led by the City of Sheboygan in the summer of 2019 and the brass-sculptured panels were reframed and relocated to the Eighth Street side of the plaza.

Quasius is a Sheboygan native and a graduate of North High School. She earned a bachelor’s degree in art from the University of Wisconsin-Oshkosh, and a master of fine arts degree from the University of Oklahoma. She lived and worked in New York City during the 1980s and was known for her large sewn canvas recreations of famous paintings. Quasius, who lives in Sheboygan, now works in cast metals and has other commissions and works in progress. Her artwork has been purchased by museums and private collectors.

The Weill/Byk Public Library Terrace, which is adjacent to the east and north sides of the building, was named in recognition of Stefanie H. Weill Charitable Fund, Inc. The fund was established to support capital expenditures connected to art, music, and education in Sheboygan County, the Stefanie H. Weill Charitable Fund, Inc., was a major donor to the Mead Public Library Centennial Building Project. The fund was created in 1969 by Stefanie Weill in memory of her husband John L. Weill, who died in 1967. After her husband’s death, Stefanie Weill remained active in the Sheboygan community. In the early 1980s, her brother, Otto Byk, moved to Sheboygan from New York. He shared his sister’s great interest in art and music and he also was a frequent visitor to Mead Library. After Stefanie Weill’s death in 1985, and her brother’s death in 1990, additions were made to the fund she created.

Stay Up To Date!

Get the latest updates about what’s happening at the library!
Sign Up