The Threading a Dream mural was created by artists Nancy Saleme and Patricia Cazoria and installed in the summer of 2018 through the John Michael Kohler Arts Center's Connecting Communities program as part of an Art in Public Spaces residency.

Saleme and Cazoria, an aunt and niece collaborative-artist team, engaged the community in billingual workshops and artist lectures that inspired the work, which depicts Sheboygan landmarks and locations. The mural celebrates the warmth, integration and respect the artists experienced in their interactions with the local community.

Threading a Dream offers a message of hope and new beginnings for all.

The 4-by-16-foot vertical cast brass relief sculptures along Eighth Street are the work of Sheboygan artist Sharron Quasius, in honor of Stefanie Weill, her husband John, and her brother Otto Byk.

The sculptures were the result of 18 months of work by the artist. After Quasius researched and then chose images for the four panels, she began the process of sculpting each of the 16 panels in an oil-based clay called plasticine. Those 4-by-4 foot panels were moved to the Kohler Co. Foundry where Quasius spent nine weeks while she made molds from sand and resin with the assistance of workers there. Each mold was subsequently used to produce a brass casting using 1,000 pounds of molten brass at a temperature of 1,860 degrees. Each panel weighs about 700 pounds. Work on the panels was completed in Quasius’ studio where she ground and buffed each one and applied a patina.

The sculptures were originally part of a 25-foot-high clocktower commissioned by the Stefanie H. Weill Charitable Fund, Inc., and located on the Weill/Byk Public Library Terrace, just to the north of the library entrance. The project was supported by Arts/Industry, a program of the John Michael Kohler Arts Center. The clocktower was razed as part of plaza renovation project led by the City of Sheboygan in the summer of 2019 and the brass-sculptured panels were reframed and relocated to the Eighth Street side of the plaza.

Quasius is a Sheboygan native and a graduate of North High School. She earned a bachelor’s degree in art from the University of Wisconsin-Oshkosh, and a master of fine arts degree from the University of Oklahoma. She lived and worked in New York City during the 1980s and was known for her large sewn canvas recreations of famous paintings. Quasius, who lives in Sheboygan, now works in cast metals and has other commissions and works in progress. Her artwork has been purchased by museums and private collectors.

The Weill/Byk Public Library Terrace, which is adjacent to the east and north sides of the building, was named in recognition of Stefanie H. Weill Charitable Fund, Inc. The fund was established to support capital expenditures connected to art, music, and education in Sheboygan County, the Stefanie H. Weill Charitable Fund, Inc., was a major donor to the Mead Public Library Centennial Building Project. The fund was created in 1969 by Stefanie Weill in memory of her husband John L. Weill, who died in 1967. After her husband’s death, Stefanie Weill remained active in the Sheboygan community. In the early 1980s, her brother, Otto Byk, moved to Sheboygan from New York. He shared his sister’s great interest in art and music and he also was a frequent visitor to Mead Library. After Stefanie Weill’s death in 1985, and her brother’s death in 1990, additions were made to the fund she created. 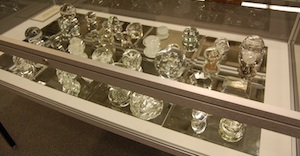 Gene Schuttey, of Sheboygan, gave to Mead Public Library items from his collection of decorative arts, including many paperweights and bronzes displayed on the library's second floor. Schuttey died on September 30, 2009.

Schuttey was born on January 15, 1924 and raised in Sheboygan and is a graduate of the University of Wisconsin. For many years, he maintained Aida Studio in Sheboygan where he photographed four generations of some area families. He had an interest in theater and was the company photographer for Milwaukee’s Fred Miller Theater and the Milwaukee Repertory Theater as well as the Sheboygan Arts Foundation and Sheboygan Community Players. His interest in the fine and decorative arts led him to many years of collecting, including the paperweights and bronzes he has given to Mead Public Library.

Outdoor Sculptures "Eagle" and "Helping Hands"
Two sculptures from Woodlot Gallery are on display outside of Mead Public Library. One was purchased with funds donated to the library by the ACUITY Charitable Foundation, part of its “ACUITY in the Arts” initiative.“Eagle,” designed by Narendra Patel for fabrication in steel, stands outside the southeast corner of the library building, at the corner of 8th St. and New York Ave. Narendra Patel, professor emeritus at the University of Wisconsin-Milwaukee, is known for his sculpture and the innovative technique of chemically changing color on metal.

A second sculpture, near the southwest corner of the building, is called "Helping Hands." The work is by Milwaukee artist/sculptor Nancy Metz White. It is brightly colored and made of steel dies that were used to cut leather at a glove factory, epoxied. The purchase was made possible by the generous gifts of Dr. Graf, the Hazel Hansen Estate, the Hugh & Ruth V. Ross Charitable Fund, Inc., and the Victor Seib Estate. 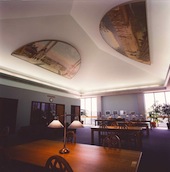 The Quiet Study Room is furnished with eight original tables from the 1904 Sheboygan Public Library building (a Carnegie library), located on 7th Street. The two-armed library table lamps are reproductions of those used in 1904.The 32 Quiet Study Room chairs were donated by Sheboygan Lodge No. 11 F. & A.M. of Wisconsin. The chairs were made by the Phoenix Chair Company of Sheboygan. James H. Mead, for whom the library is named, was the first president of that company.

The Edgar Cameron murals, which have been installed in the Quiet Study Room, were restored with funding from the Arthur J. Olsen Foundation Ltd. Professional art conservator and Sheboygan native Tony Rajer, working with volunteers, completed the conservation project in 1996.