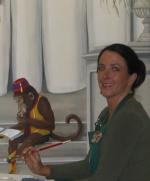 A mural located on the landing between the first and second floors celebrates the Commedia dell‘Arte, a form of improvisational comedy that flourished in 16th and 17th century Italy. The mural offers a view of Piazza San Marco in Venice with the Commedia dell‘Arte performing on the stage. It was created, executed, and donated to Mead Public Library by Mollie Morning Star. 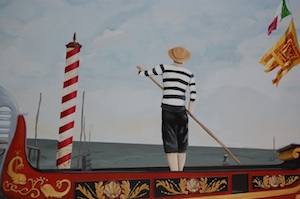 In 2010, Morning Star was commissioned by the Mead Public Library Board to create an extension of the mural.

Morning Star, the muralist, relocated here from North Carolina in 2002. She learned to paint as a child, working with her stepmother Sharon McGinley-Nally, an accomplished illustrator/artist. She attended the Barnestone Academy of Art in Pennsylvania and also trained with a European Master Craftsman. Her work is featured in exclusive homes and businesses across America and the Bahamas. In 1999 she worked at Universal Studios Park in Florida recreating 15 ancient Greek murals for the attraction, “Poseidon's Fury.”

The Commedia dell‘Arte theme was chosen by Morning Star as a celebration of the arts: painting, music, literature and theater. “It’s a wonderful theme for the Mead Library. While it is classical in design and style, it has an air of whimsy that makes it appealing to all ages.” 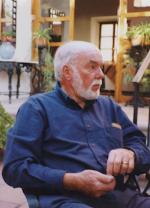 Twenty-two paintings were included in the 2012 exhibit, “Celebration of Life, Heritage Paintings by James Michael.” They represent some of his personal favorites from 30-plus years of painting. They showcase his evolving vision from traditional historical landscape watercolors to a stronger personal technique, similar to the richness of oil paintings. 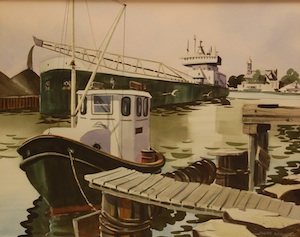 The ten paintings in the 2013 gift were designated by the donor to honor retired Library Director Sharon Winkle. Two other paintings included in the first floor exhibit had been given to Mead Public Library previously: depictions of the John Michael Kohler home from an anonymous donor; and of the steamer Sheboygan, purchased by the Friends of Mead Public Library with donations from community members.

Eleven paintings, included in the 2012 gift from the estate, hang in staff areas of the library building, at the request of the donor. These may be viewed by prior arrangement with the library’s Administrative Services staff.

After 29 years as a physician in the Internal Medicine Department at the Sheboygan Clinic, James Michael retired to paint full time and ultimately to teach watercolor painting at the John Michael Kohler Arts Center, Plymouth Arts Center, and the Clearing in Ellison Bay, Wisconsin.

He exhibited locally and nationally, and became a signature member of the Wisconsin Watercolor Society (WWS), the Transparent Watercolor Society of America (TWSA), the National Watercolor Society (NWS), and the American Watercolor Society (AWS) and has been the recipient of numerous awards. More than a thousand of his paintings hang in private and corporate collections, and many were donated to local charity benefit auctions including fund-raising events sponsored by the Friends of Mead Public Library. 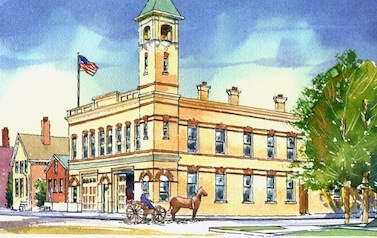 Vega Watercolors
The collection of Sheboygan watercolor paintings by former Sheboygan resident Ruben Vega is exhibited in The Loft, on the third floor of the library. It was the gift of the Kohler Foundation, Inc. to Mead Public Library for the enjoyment of the public. The paintings are based on original postcard images of historic Sheboygan scenes. 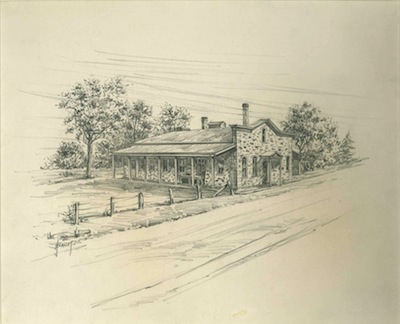 Baum Drawings
A.J. Baum, who was born in 1875 and passed on in 1952, was an artist and nationally known furniture designer.  He studied at the Cincinnati Art Academy, the Art Students’ League in New York, and with portrait painter and muralist Frank Duvaneck. He also studied industrial design at the South Kensington School in London.  He worked as a portrait painter and muralist before entering the industrial design field. He moved to Sheboygan in 1924 to join the Phoenix Chair Co. In 1932, he became a designer for the American Chair Co. He also designed costumes and settings for two productions of the Community Players. He was married to Katherine O’Connell and they had two children, John V. and Madge Therese.

In 1945, he and Sen. G.W. Buchen did a series on historic Sheboygan County which ran each Friday in The Sheboygan Press — Baum doing the drawings and Buchen the stories. They were among the most popular items ever published in The Press. In 1952, a few months before he passed on, Baum presented 39 of those original drawings to Mead Public Library. They were hung in the first floor of the library, but were recently removed for archival preservation.

The drawings have been posted in four parts, in the order they were hung in Mead Public Library.

The portrait of the USS Sheboygan, a World War II-era frigate, is on display in the lobby of Mead Public Library. It is the work of Sheboygan artist Roger Lahm and was dedicated in 2001 as part of a citizen-led effort to return the ship to her homeport.

The ship, a Tacoma-class frigate (all of which survived World War II), was christened on June 30, 1943.

She was a Coast Guard vessel, under the control of the U.S. Navy, one of 26 patrol frigates assigned to weather duties and guarding air routes over which thousands of men were transported to and from the European theater of operations.

An announcement from the U.S. Navy in early June 1943 indicated that President Franklin D. Roosevelt had directed the name Sheboygan be assigned to Patrol Frigate 57, in honor of the city. At the time, it was Naval custom to name patrol frigates for American cities that had contributed to the war effort.

The USS Sheboygan was built by Globe Shipbuilding in Superior, Wisconsin, one of 10 frigates built there. Her length was 304 feet, with a 37 and one-half foot beam and a cruising speed of 20 knots. A total of 77 patrol frigates were built in the U.S. by command of the U.S. Navy.

Twenty-two Sheboygan residents traveled to Superior for the launch on July 31, 1943.

The USS Sheboygan was commissioned on May 26, 1944 in New Orleans and assigned to Task Force 66, North Atlantic Patrol Force. Soon after, she was converted to a weather patrol ship in Tampa, Florida.

By October, 1944, the crew began preparing for anti-submarine warfare operations, weather operations and guard patrols in the North Atlantic, based in the small fishing village of Argentia, Newfoundland. One crew member, Peter Bayens, was from Sheboygan.

Typically, the crew spent 30 days at sea and seven days in port, usually in Argentia or Boston.

The ship sailed the waters of Iceland, Greenland, Baffin Island, Labrador, the Azores and Bermuda. One crew member told The Sheboygan Press in 1993 that the ship hit many big storms. “I tell you,” he said, “that North Atlantic is rough.”

Harold Andresen, the Globe Shipbuilding safety director in 1943, recalled in a 1981 letter, “The Sheboygan had a tremendous task as it was used as a listening post and rescue ship, patrolled for downed aircraft and swept sub packs from the Atlantic so we could get our ships through for the Normandy Invasion.” He said it’s equipment included depth charges and all-attack equipment and it was painted a camouflage color.

The USS Sheboygan earned the Victory Medal with a star and received two ribbons, the American Theater and the European Middle Eastern-African Theater Campaigns Ribbons for service during the war.

After World War II ended, the USS Sheboygan was decommissioned in Charleston, South Carolina on March 14, 1946. She was returned to the Coast Guard where she continued work in the North Atlantic until August, 1946.

She was sold to Belgium and named Mateo in 1947 while being used as an Atlantic weather observation ship. She was rebuilt as full frigate in May 1949 and served as a training ship and fishery protection vessel named F910 Ltz. V. Billet until 1958, when she was sold for scrap.

Only one small piece of the ship returned to Sheboygan, a bayonet, part of the ship’s original battle gear. It was purchased by the VFW Post 9156. Efforts to located the nameplate in Belgium failed.

In the early 1990s, there was interest by crew members in planning a reunion in Sheboygan. But the crew members planning the event thought their initial efforts were rebuffed and planned several subsequent reunions in other cities.

In 1996, Sheboygan resident Karen Wagner read a letter in The Sheboygan Press from Howard Seelye, a crew member. She took it upon herself to help the crew members plan a reunion in the city in 1998. Then she set her sights on a more tangible reminder to city residents, and, as she said, “putting the USS Sheboygan in her homeport.”

Wagner commissioned a portrait from Sheboygan artist Roger Lahm, with funding from the Sheboygan Rotary Club, and offered it to Mead Public Library for display. She organized the dedication event, which included a military honor guard and invocation. A program held on Veteran’s Day, Nov. 11, 2001, marked the unveiling of the painting of the USS Sheboygan. More than 80 people gathered to pay tribute to the ship and its crew, four of whom attended the event.