The conservation of two 1909 murals by Edgar Cameron, the first public pictorial works of art in Sheboygan County, took place in the summer of 1996 at Mead Public Library.

The murals, painted in 1909 and installed in 1910, had been located in the Bank of Sheboygan. The murals measure 9 feet high by 20 feet long in the shape of an arch. They were rescued in 1971 by Sheboygan resident Clarence Grafenstein before the bank was torn down, and donated to the city of Sheboygan. He saved an important example of Sheboygan's pictorial heritage.

Art conservator Tony Rajer of Sheboygan, working with volunteers, completed the conservation and mounting. The murals were installed on the sloped ceiling in the new second floor quiet study area in the fall of 1996.

The Edgar Cameron Murals
The Edgar Cameron murals are the only works of art on a monumental scale from the early 20th century in Sheboygan. The murals constitute a unique and rare pictorial document in the Beaux-Arts tradition, popular in the late 19th and early 20th century in the United States as a result of the 1893 Chicago Columbian Exposition which the artist had visited.

The "Sheboygan Industry and Education mural" is a classical academic work of art with an aerial view of the Sheboygan Harbor, taken from the steps of an imaginary Greek-like temple. There are three figures: a cabinet-maker, a Greek Goddess (symbolizing Sheboygan), and a young boy (symbolizing Sheboygan's future). The mural is typical of 19th Century French taste in mural art.

This mural is titled "William Paine and Colonel Oliver Crocker with Native Americans in the Building of the First Dam on the Sheboygan River."  This Native American mural shows the American landscape painting style known as the Hudson River School. The colors are subtle pastels in grey-blue and earth tones.

The two murals are indicative of Cameron's virtuosity and ability to paint historical and allegorical themes. He learned to paint in France in the academic tradition (industry mural), and, in the other, pays tribute to his American teachers Dewing and Chase.

The murals are in remarkably good condition, considering their age, fortunate removal before the demolition of the bank, and storage during the past 25 years. 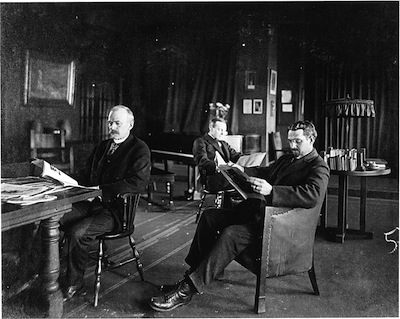 Edgar Cameron - The Artist
Edgar Cameron was an artist and author, specializing in murals. He was born in Ottawa, Ill., on May 26, 1862. He had a distinguished career. He studied at the Chicago Academy of Design, at the Arts Students League of New York with T. W. Dewing and William Merrit Chase, and at the Ecole des Beaux Arts in Paris under the artists Cabanel, Benjamin Constance, and Laurens.

He established his primary studio for mural and easel painting in Chicago. He worked as an illustrator for the Chicago Tribune as well as many magazines. He was an honorary member of the Society of Fine Arts and Public Instruction in Paris where he was made a member in 1920. He was awarded the Municipal Art League of Chicago Purchase Award in 1926, and was a member of the Chicago Gallery Association in 1927.

His works today can be found in the Chicago Historical Society, the Chicago Union Club, and the Supreme Court Library of the State of Illinois in Springfield, Ill. His painting "Youth and Moonlight" hangs in the Chicago City Hall, purchased by the city in 1915. His "Cabaret Breton" is in the collection of the Art Institute of Chicago. He has mural decorations in the Genesee County Courthouse in Flint, Mich. He participated in various expositions from 1888 until his death in Chicago in 1944.  Cameron is seated on the left hand side of the picture. 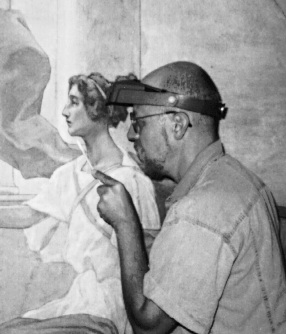 Tony Rajer - Project Director
Tony Rajer, of Sheboygan, was a professional art conservator with more than 20 years of experience working on conservation projects across the country and around the world. Rajer died in November 2011.

He taught at the University of Wisconsin and also lectured in numerous cities in the United States, Europe, and Latin America. Rajer held a degree in art history from UWM, has studied at the University of Paris, Sorbonne, and earned certificates in conservation from Harvard University, Centro Churubusco in Mexico City, and the International Conservation Institute in Rome (ICCROM). Among his many mural conservation projects are the Panama Canal Commission, the Wisconsin State Capitol, and 65 WPA Post Office murals in the Midwest. In 1992, he was invited to the Sistine Chapel Restoration as an observer.